Paraphrases on Romans and Galatians

Erasmus yearned to popularize the New Testament, to make the Bible and the understanding of Scripture available to everyone - to 'the farmer, the tailor, the mason, prostitutes, pimps, and Turks, ' in his words. He therefore composed paraphrases in order to simplify and explain Scripture. The Paraphrases were successful beyond his expectations and were quickly translated into French, German, English and other languages.

In them the words of the Apostle Paul provide the core of a text which is expanded to clarify Paul's argument, revealing its assumptions, suggesting its implications, and setting its parts more clearly in relation to each other. In this respect, it is like a commentary.

But the Paraphrases are much more than commentary. They seek not only to clarify, but also to enliven. They bring the reader to a direct confrontation with the Apostle himself by presenting the whole (both core words and expansion) under the persona of Paul, vividly portraying the Apostle's reactions to the situation to which he was responding in this letters. Erasmus takes the images and analogies through which Paul argues his case for 'justification through faith' and expands them into colorful and dramatic vignettes of the inner spiritual struggle and victory of 'everyman.'

Volume 42 of the Collected Works of Erasmus series. 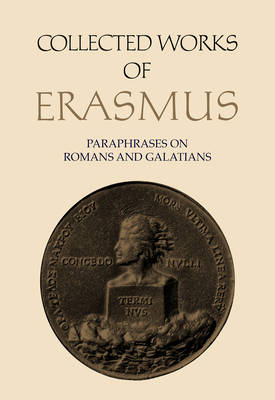