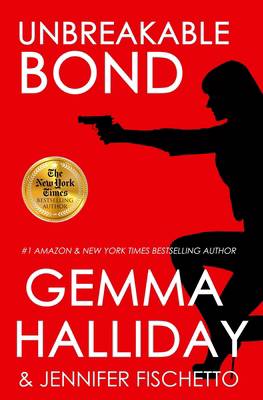 From #1 Amazon, New York Times & USA Today Bestselling author Gemma Halliday comes a female PI who is on the case of fun, fashion, and murder... Her name is Bond. Jamie Bond. And her life is about to be shaken and stirred in a cocktail of lies, scandal, and one very dead body. Jamie Bond is a former cover model who switches gears to take over the family business: The Bond Agency, a high-powered PI firm located in Los Angeles that specializes in domestic espionage-catching cheating husbands. Jamie's assembled a team of other disenchanted former models to help her take names and kick derrieres among LA's wealthiest philandering husbands. Her current client: Mrs. Veronica Waterston, the young, distraught wife of superior court judge, Thomas Waterston, known for his tough sentencing, right-wing leanings, and his fondness for blondes with double D's. Easy target. But Jamie's simple case takes an unexpected turn for the worse when the not-so-good judge winds up on the ten o'clock news with a bullet through his head. It's clear that someone has set Jamie up, and suddenly she's on the run, under fire, and in serious jeopardy of losing it all. With a hot ADA. on her trail, a killer on the loose, and her life on the line, Jamie must prove once and for all that nobody messes with a Bond. The Jamie Bond Mysteries:
Unbreakable Bond (book #1)
Secret Bond (book #2)
Lethal Bond (book #3)
Dangerous Bond (book #4)
Fatal Bond (book #5)
Deadly Bond (book #6) Here's what critics are saying about Gemma Halliday's books: "A saucy combination of romance and suspense that is simply irresistible."
Chicago Tribune "Stylish... nonstop action...guaranteed to keep chick lit and mystery fans happy!"
Publishers' Weekly, starred review "Ms. Halliday is the undisputed queen of the genre."
Fresh Fiction