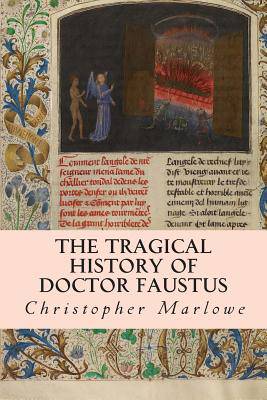 The Tragical History of Doctor Faustus

The Tragical History of the Life and Death of Doctor Faustus, commonly referred to simply as Doctor Faustus, is an Elizabethan tragedy by Christopher Marlowe, based on German stories about the title character Faust, that was first performed sometime between 1588 and Marlowe's death in 1593. Two different versions of the play were published in the Jacobean era, several years later.[1] The powerful effect of early productions of the play is indicated by the legends that quickly accrued around them-that actual devils once appeared on the stage during a performance, "to the great amazement of both the actors and spectators", a sight that was said to have driven some spectators mad. The Admiral's Men performed Doctor Faustus 25 times in the three years between October 1594 and October 1597. On 22 November 1602, the diary of Philip Henslowe recorded a £4 payment to Samuel Rowley and William Bird for additions to the play, which suggests a revival soon after that date.[2] The powerful effect of the early productions is indicated by the legends that quickly accrued around them. In Histriomastix, his 1632 polemic against the drama, William Prynne records the tale that actual devils once appeared on the stage during a performance of Faustus, "to the great amazement of both the actors and spectators". Some people were allegedly driven mad, "distracted with that fearful sight". John Aubrey recorded a related legend, that Edward Alleyn, lead actor of The Admiral's Men, devoted his later years to charitable endeavours, like the founding of Dulwich College, in direct response to this incident. In the prologue, The Chorus introduces the reader to Faustus and his story. He is described as being "base of stock"; however, his intelligence and scholarship eventually earns him the degree of a Doctor at the University of Wittenburg. During this opening, the reader also gets a first clue to the source of Faustus's downfall. Faustus's tale is likened to that of Icarus, who flew too close to the sun and fell to his death when the sun melted his waxen wings. This is a hint to Faustus's end as well as bringing to the reader's attention the idea of hubris (excessive pride), which is represented in the Icarus story and ultimately Faustus'. Faustus comments that he has mastered every subject he has studied. He depreciates Logic as merely being a tool for arguing; Medicine as being unvalued unless it allowed raising the dead and immortality; Law as being mercenary and beneath him; and Divinity as useless because he feels that all humans commit sin, and thus to have sins punishable by death complicates the logic of Divinity. He dismisses it as "What doctrine call you this? Que sera, sera" (What will be, shall be). Faustus instructs his servant Wagner to summon Valdes and Cornelius, a famous witchcrafter and magician, respectively. Two angels, called the Good Angel and the Bad Angel, appear to Faustus and dispense their own perspectives of his interest in magic and necromancy. Though Faustus seems momentarily dissuaded, he is apparently won over by the Bad Angel, proclaiming, "How am I glutted with conceit of this?" ("conceit" meaning the possibilities magic offers to him). Valdes and Cornnelius declare that if Faustus devotes himself to magic, great things are indeed possible with someone of Faustus' learning and intelligence. Faustus' absence is noted by two scholars who are less accomplished than Faustus himself. They request that Wagner reveal Faustus' present location, a request which Wagner at first haughtily denies, then bombastically reveals. The two scholars worry about Faustus being corrupted by the art of Magic and leave to inform the rector of the university.