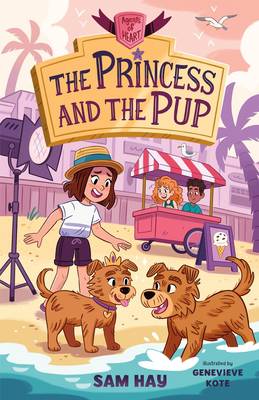 The Princess and the Pup: Agents of H.E.A.R.T.

In The Princess and the Pup, Sam Hay's third Agents of H.E.A.R.T. chapter book adventure illustrated by Genevieve Kote, a simple day at the beach for Evie and her friends quickly spirals into chaos, filled with ice cream, film crews, magical disguises, dogs of all shapes and sizes, and a surprisingly secretive fairy tale figure.

Evie's happily ever after is almost here. Her parents are allowing her to help out around the diner, she's made a couple of fantastic friends, and Fudge, the adorable stray puppy she found, only has a few days left in his trial period, before they can officially adopt him. Sure, there's been a few crashes and mishaps along the way, but Evie the Wonder Waitress has become a pro at dealing with dog related chaos. Or so she thought...right up until Fudge crashes into a film set on the beach! Not only does he befriend Princess, the adorable puppy star of the show, he also gains the attention of the show's animal trainer, who is always looking for smart talented pups to train! If Evie can't hide Fudge away, she could lose him forever... Fortunately, help is just a wish on a magical storybook away!