Before they became the crack team of engineers we've all come to know and love on the U.S.S. da Vinci, the Starfleet Corps of Engineers team had plenty of adventures throughout the galaxy. Now some of those exploits are chronicled, featuring special guests from all across the Star Trek universe. WHAT'S PAST Progress: Captain David Gold's previous command brings him and former Starship Enterprise(TM) medical officer Dr. Katherine Pulaski to Drema IV and a special young woman named Sarjenka. The Future Begins: Learn how Captain Montgomery Scott found himself in charge of the S.C.E.--also featuring Geordi La Forge, Admirals Alynna Nechayev and William Ross, and Robin Lefler. Echoes of Coventry: During the height of the Dominion War, Bart Faulwell is part of a team that must crack Cardassian codes. Distant Early Warning: In the 23rd century, the U.S.S. Lovell helps in the construction of Starbase Vanguard in this special prequel to the hit novel series. 10 Is Better than 01: An inside look at the culture of Bynaus, home of 110--the future Soloman. Many Splendors: Before they were reunited on the da Vinci, Sonya Gomez and Kieran Duffy had a whirlwind romance aboard the Starship Enterprise. 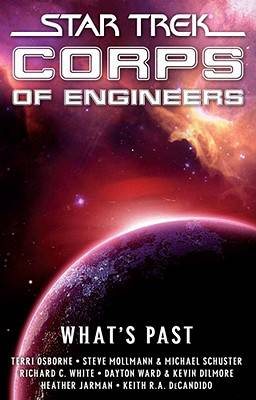