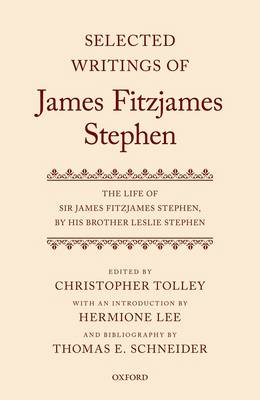 The Life of Sir James Fitzjames Stephen, by His Brother Leslie Stephen

James Fitzjames Stephen was a distinguished jurist, a codifier of the law in England and India, and the judge in the ill-fated Maybrick case; a serious and prolific journalist, a pillar of the Saturday Review and the Pall Mall Gazette; and in Liberty, Equality, Fraternity (1873) the
hard-hitting assailant of John Stuart Mill. Fitzjames's younger brother Leslie was founding editor of the Dictionary of National Biography and father of Virginia Woolf. The Life of Sir James Fitzjames Stephen, by his brother Leslie Stephen (1895) is the biography of one eminent Victorian by another.
It is a lucid and affectionate portrait, yet far from uncritical, as revealing of its author as its subject. With a narrative that embraces legal history, the government of India, the Victorian press, the crisis of religious faith, and the paradise lost of political liberalism, the biography is
also an indispensable source for the history of the Stephen family, which belonged to what Noel Annan called the intellectual aristocracy of the nineteenth century, connecting the Clapham Sect to the Bloomsbury group. This first modern edition of The Life of Sir James Fitzjames Stephen is a volume in the Oxofrd series, Selected Writings of James Fitzjames Stephen. It includes an introductory essay by Hermione Lee, extensive notes, four appendices of additional documents (many previously unpublished), and a
bibliography of Fitzjames Stephen's articles and reviews by Thomas E. Schneider.