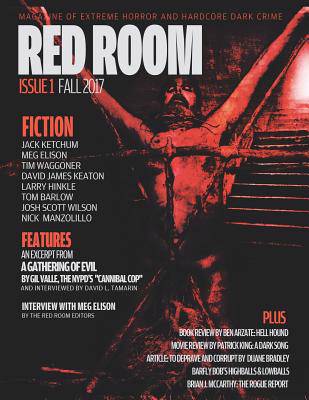 NOTE: This is the black and white version of the magazine. A full color version is also available.

Red Room is a magazine of extreme horror and hardcore dark crime.

"The Phantom Video Stream" by Nick Manzolillo sets the tone with red-room atmospherics in the story of a man who discovers a hidden channel streaming from what may be another reality.

Tim Waggoner's "Are You Crazy?" answers its own question in shocking Waggoner style.

Larry Hinkle's "Meat Cute" opens with "Stop staring at her tits!" and ends with a coldblooded revelation. Short and not so sweet.

Tom Barlow's "Selfie" demonstrates that two heads aren't always better than one, not when they're spitting images.

Meg Elison's "The Middle Child" takes an unflinching look at fame and greed and the mania underlying video virality.

David James Keaton, aka DJK, takes us for a ride into brutal biker mayhem that hits like a jackhammer in "The Flowery." Some tattoos ain't cool.

Jack Ketchum reprises "Megan's Law," a disturbing look at what can happen when a child molester moves into a concerned dad's neighborhood.

Plus, an exclusive excerpt from the NYPD's "Cannibal Cop" Gil Valle's upcoming Comet Press release of his first novel A Gathering of Evil, which parallels the message-board fantasies that landed him in jail.

FEATURES:
Duane Bradley takes an irresistible look at the Video Nasties and the uproar those "obscene" video cassettes caused in the UK back in the 1980s. Ben Arzate reviews a formerly out-of-print classic horror novel, which is making a howling comeback. Patrick King reviews one of the best of the recent horror movie releases.

Red Room interviews the phenomenal Meg Elison, and David L. Tamarin interviews Gil Valle, getting him to open up about his incarceration by the "thought police."

A surreal, behind the scenes glimpse at the Red Room headquarters with rogue reporter Brian J. McCarthy. 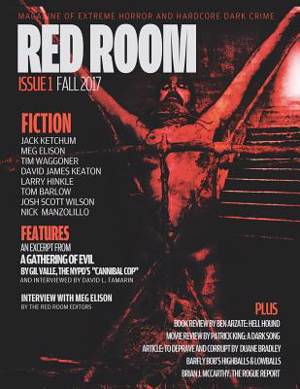