"His manner of speaking, like that of all the subordinated, excluded, was awkward, like a body full of wounds, into which at any time anyone can strew salt, yet so insistent, that it is painful to listen to him," from The Carpenter

The Austrian playwright, novelist, and poet Thomas Bernhard (1931-89) is acknowledged as among the major writers of our time. The seven stories in this collection capture Bernhard's distinct darkly comic voice and vision--often compared to Kafka and Musil--commenting on a corrupted world.

First published in German in 1967, these stories were written at the same time as Bernhard's early novels Frost, Gargoyles, and The Lime Works, and they display the same obsessions, restlessness, and disarming mastery of language. Martin Chalmer's outstanding translation, which renders the work in English for the first time, captures the essential personality of the work. The narrators of these stories lack the strength to do anything but listen and then write, the reader in turn becoming a captive listener, deciphering the traps laid by memory--and the mere words, the neverending words with which we try to pin it down. Words that are always close to driving the narrator crazy, but yet, as Bernhard writes "not completely crazy."

"Bernhard's glorious talent for bleak existential monologues is second only to Beckett's, and seems to have sprung up fully mature in his mesmerizing debut."--From Publishers Weekly, on Frost

"The feeling grows that Thomas Bernhard is the most original, concentrated novelist writing in German. His connections . . . with the great constellation of Kafka, Musil, and Broch become ever clearer." --George Steiner, Times Literary Supplement, on Gargoyles 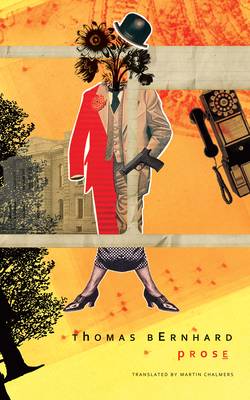