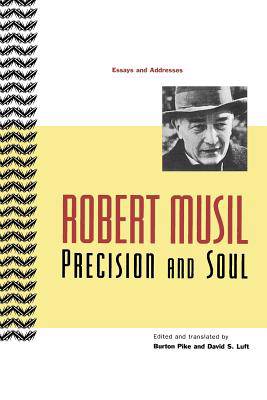 We do not have too much intellect and too little soul, but too little precision in matters of the soul.--Robert Musil Best known as author of the novel The Man without Qualities, Robert Musil wrote these essays in Vienna and Berlin between 1911 and 1937. Offering a perspective on modern society and intellectual life, they are concerned with the crisis of modern culture as it manifests itself in science and mathematics, capitalism and nationalism, the changing roles of women and writers, and more. Writing to find his way in a world where moral systems everywhere were seemingly in decay, Musil strives to reconcile the ongoing conflict between functional relativism and the passionate search for ethical values. Robert Musil was born in 1880 and died in 1942. His first novel, Young Törless, is available in English. A new two-volume translation by Burton Pike and Sophie Wilkins of The Man without Qualities is forthcoming from Alfred A. Knopf. Now we have these thirty-one invaluable and entertaining pieces, from an article on 'The Obscene and Pathological in Art' to the equally provocative talk 'On Stupidity, ' which, with a new translation of The Man without Qualities forthcoming . . . amount to a literary event for the reader of English comparable to Constance Garnett's massive translation of Chekhov's stories.--Joseph Coates, Chicago Tribune Musil is one of the few great moderns, one of the handful who ventured to confront the issues that shape and define our time. . . . He has a range and a striking capacity every bit as great as that of Mann, Joyce, or Beckett.--Boston Review These essays are crucial in understanding a writer and critic whose lifelong task was an attempt to resolve the dichotomy between the precision of scientific form and the soul--the matter of life and art.--Choice