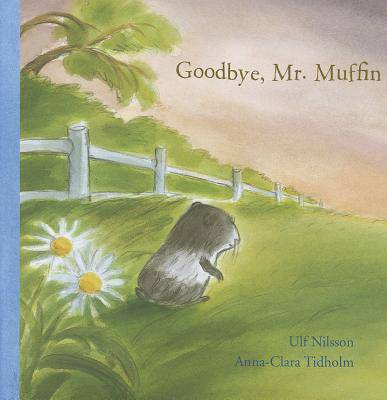 "I've had it good, better than most: a very clever and kind wife, a little blue house with its own letter box, six furry little children..."

In his youth, Mr. Muffin was a strong guinea pig who could carry a whole cucumber on his back. Now old, grey and tired, he looks back on his life. Then one Wednesday morning, he feels a sharp pain in his stomach...

This picture book is for ages three and up. It tells the touching story about the death of a much-loved pet. Growing old, death rites, the question of the afterlife, all handled with warmth and gentle humor.

The story also shows that the final stages of life need not be a 'difficult' subject. A beautiful book that children love--it is one of Sweden's bestselling and most-borrowed children's books--Goodbye Mr Muffin won the 2002 Swedish August Prize. Voted book of the year by a children's poll in both the Swedish Book Jury Prize (2002) and the French Chronos Prize for Youth Literature (2008-2009).